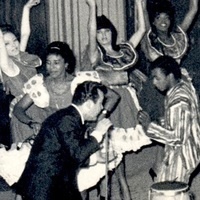 How do national discourses on race shape our understanding of music and music history? By the end of the nineteenth century, Argentine nationalist discourse asserted the absolute disappearance of people of color from the country. This narrative led not only to the denial of Afro-diasporic roots of the tango, Buenos Aires’s most famous popular music, but also the alleged impossibility of an authentically Argentine jazz. Drawing from critical race studies and recent interdisciplinary interventions into the history and discourse on race in Argentina, this talk will explore the manner in which Argentine racial discourse has influenced the popular music histories of tango and Argentine jazz, as well as the performance traditions of these musics.

Eric Johns is a Ph.D. candidate in musicology at the University of California, Riverside. His work examines the political and ethical implications of gaps and errors in works of music history, and how hegemonic discourses inform, and are reinforced by narratives of music history. His dissertation, “Otra cosa es con la guitarra: Representation and Significance of the Guitar in Rioplatense Tango,” constructs a genealogy of tango histories and works towards deconstructing the processes of marginalization of the guitar and guitarists in those texts.

Grad Slam 2020
On Tuesday, March 3, the campuswide Grad Slam 2020 competition took place at the Culver Center.  Nine doctoral students from across campus each had three minutes to explain the nature and significance of their research.  Of the nine, two were from the Music Department:  composer Ethan Castro and musicologist Eric Johns.  Ethan’s talk was entitled “ResonX – Feeling Sounds through Vibrations” and dealt with his technological innovations that help the hearing-impaired to perceive musical sound through tactile means.  Eric presented on “Racing Music/Musicking Race,” which explored the erasure of Afro-Argentine musicians from the narrative of tango history.
.
All nine presentations were very polished, and our students faced stiff competition.  We are pleased to announce that Eric Johns won this year’s Grad Slam competition, which comes with a monetary award of $5,000.  He will now represent our campus at the systemwide competition to be held in San Francisco on May 8.  The winner of that competition will win another $5,000.  And there’s more good news:  Ethan won third prize and an award of $1,000!

Please join us in congratulating both Ethan and Eric for making it to the final round at the campus level and for winning two of the three awards.  They are the very first students in either the Arts or Humanities at UCR to win a coveted Grad Slam award.  The Music Department should feel very proud today—and every day!