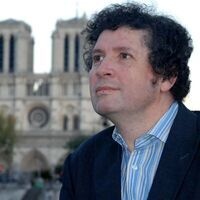 Many music lovers have a certain fascination with Impressionism and wish there would be more music written in this short-lived style. Only Claude Debussy remained an Impressionist throughout his life, some others temporarily touched on Impressionism - and left it again. Maurice Duruflé (1902-1986) is widely known to the organ world, but has also written some widespread repertoire that is not for organ. His Requiem belongs to the most beloved settings of the funeral mass even though this was his first attempt to write vocal music (!).  The lecture will focus on Duruflé's interesting life including stories and new information from Duruflé’s family in Paris - and will portray a unique musical style that cannot be confused with other composers' musical language. And maybe we find an answer to the question whether Impressionism has found a rather late end in this French composer, who was obsessed with Gregorian chant and the lushness of harmony at the same time.

Biography
Organist and Director of Music: Wolfgang Reisinger studied church music and organ performance at the Vienna University of Music (1983-1993). Between 1987 and 1990 organist and choir director at the Baroque abbey of St. Florian (at Anton Bruckner’s organ), 100 miles west of Vienna. In 1987, he started his international career as interim cathedral organist at the Swedish Lutheran Cathedral of Strängnäs in Sweden. Wolfgang Reisinger has been serving as the organist at St. Brigitta in Vienna since 1979. Between 2001 and 2003 he served as Director of Music at the Catholic Campus Center at the University of Kansas in Lawrence and received his first doctorate in organ performance from the University of Kansas (2003). Another doctorate (musicology) followed in 2008 (University of Music in Vienna).

Organist: Since 1986, Wolfgang Reisinger has been concertizing regularly in most European countries, e.g., in Scandinavia, Germany, Italy, Slovenia, Croatia, Serbia, Bulgaria, Poland, Spain, Portugal, France; in Russia, China, South Korea, and the USA. He usually includes one or several organ improvisations based on hymn tunes or on given themes. His goal ist also to promote the organ as a musical and as a liturgical instrument, especially in countries where the organ is not yet fully accepted. Wolfgang Reisinger has given numerous master classes on Bach, French and German Romantic organ music, Maurice Duruflé’s music, improvisation and liturgical organ playing. He has recorded several CDs as organist and choir director.

Teacher: Wolfgang Reisinger started his teaching career in Upper Austria and became professor at the Conservatory of sacred music in Vienna in 1990. There he teaches Organ, Improvisation, Harmony, Organ Building and Design, Liturgical Organ Playing, and History of Sacred Music. On two occasions, he served as guest professor at the University of Music in Vienna and taught Hymnology and Figured Bass at the University of Music in Graz, Austria. He has continued to keep his side job as a high school teacher since 1991. Frequently Wolfgang Reisinger gave guest lectures at US universities and continues to direct international church music conferences (Laudate Dominum, Austrian Week of New Sacred Music).

Organ Consultant: During his time as Director of Sacred Music of the Archdiocese of Vienna, Wolfgang Reisinger was responsible for supervising of all organ and church bell projects in Vienna. He intensively dealt with organ builders and helped many parishes with organ renovations and building new organs. By attending several international conferences dealing with organ building and church bells in Europe, he was able to further develop his professional skills.  Wolfgang Reisinger loves to stay in touch with a lot of European and American colleagues to constantly broaden his musical horizons.