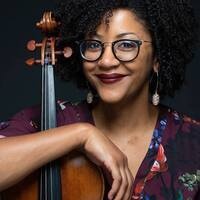 Please register in advance for this presentation: here
After registering, you will receive a confirmation email containing information about joining the meeting.

​Ashleigh is co-founder, Artistic/Executive Director and Violist of Castle of our Skins, a Boston-based concert and educational series devoted to celebrating Black Artistry through music. In recognition of her work, she has presented at IDEAS UMass Boston Conference and 180 Degrees Festival in Bulgaria; has been featured in the International Musician and Improper Bostonian magazines as well as the Boston Globe; and was awarded the 2016 Charles Walton Diversity Advocate Award from the American Federation of Musicians. She is a 2015 St. Botolph Emerging Artist Award recipient, a 2019 Brother Thomas Fellow, a nominee for the 2020 “Americans for the Arts Johnson Fellowship for Artists Transforming Communities,” and named one of WBUR’s “ARTery 25”, twenty-five millennials of color impacting Boston’s arts and culture scene.