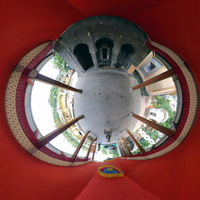 The immersive sound and video installation Sound Imaginations – at the UCR Culver Center of the Arts, February 29-March 8 – investigates listening cultures in different geographic and cultural contexts by exploring relationships between sound, image, space, and culture. It was developed during my three years of Senior Residence at the UCR Center for Ideas and Society. This immersive multimedia event built on the Black Box consists of a multi-channel surrounding sound projection – 8 speakers – and a multi-visual projection – 1 large screen and 8 monitors. Immersed in the audio-visual environment, the audience will experience a diversity of listening cultures from many different places. The installation presents recording of ambisonics sound and 360 video made in Riverside (CA), São Paulo (Brazil), Moscow (Russia), Pune (India) and Mannheim (Germany). The synchrony and asynchrony between image and sound create a myriad of relationships such as conformity, contesting, complementarity, oppositions, ambiguities, and so on. It develops a universe of real and virtual sound imaginations. Link to the event: https://artsblock.ucr.edu/Exhibition/sound-imaginations.

Paulo Chagas is Professor of Music in the UC Riverside Department of Music. Born in Salvador, Brazil, Chagas has created over 160 works in many different forms including stage, orchestra, chamber, choral, percussion, solo instruments, electroacoustic, and multimedia. His award-winning and ambitious productions have been applauded throughout the Americas, Europe, and Asia. After living and working for extended periods in Belgium and Germany, Chagas has resided in the U.S. since 2004.