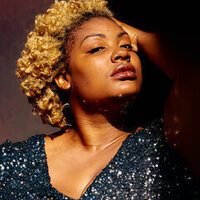 Please register in advance for this event:
https://ucr.zoom.us/meeting/register/tJMvc-ChqDMiH9HBtjK90FJv-6pQ04pmfbFo
After registering, you will receive a confirmation email with information about joining the presentation.

Hailed by the New York Times as a "striking mezzo soprano" and by the San Francisco Chronicle for her "electrifying sense of fearlessness," Raehann Bryce-Davis opened the 2019/20 season singing Verdi’s Requiem with conductor Kent Nagano and the Orchestre symphonique de Montréal at the Olympic Stadium. She then returns to Opera Vlaanderen for her role debut as Eboli in Verdi’s Don Carlos and made her LA Opera debut in the World Premiere of Aucoin and Ruhl’s Eurydice, a coproduction with The Metropolitan Opera, and sings Sara in Roberto Devereux opposite Angela Meade and Ramon Vargas. Further performances of the season include: Unknown, I Live With You at the Kurt Weill Festival Dessau, A Nation of Others at Carnegie Hall with the Oratorio Society New York, Nathaniel Dett’s The Ordering of Moses with the Harlem Chamber Players, Mendelssohn's Elijah with St. George’s Choral Society, and a recital series for the Art Song Preservation Society in New York with pianist Mark Markham. Last season she made her role debuts as Leonor in Donizetti’s La Favorite at the Teatro Massimo di Palermo, Marguerite in Berlioz’s La Damnation de Faust conducted by Maestro John Nelsonwith the Orquesta Sinfónica Nacional de Costa Rica, Ms. Alexander in Satyagraha at Opera Vlaanderen, Kristina in The Makropulos Affair at the Janáček Brno Festival, Verdi's Requiem with the Oratorio Society of New York at Carnegie Hall, Martinů’s Julietta with the American Symphony Orchestra at Carnegie Hall, and Mahler’s Symphony No. 8 with the South Dakota Symphony Orchestra.

Additional opera credits include Wellgunde in Wagner’s Die Ring-Trilogie at Theater an der Wien, Madeline Mitchell in Heggie’s Three Decembers at Opera Maine, and while a member of the Junges Ensemble at Opera Vlaanderen she sang: Nezhata in Rimsky-Korsakov’s Sadko, Kristina in Janáček’s The Makropulos Affair, and Mary in Wagner’s Der fliegende Holländer.﻿ She was a participant in San Francisco Opera’s prestigious Merola Opera Program and while a resident artist at Michigan Opera Theatre, she sang: Third Lady in Mozart’s Die Zauberflöte, Lady in Waiting in Verdi’s Macbeth, and Ma Moss in Copland’s The Tender Land. Other roles have incuded Mama McCourt in Moore’s The Ballad of Baby Doe with Chautauqua Opera, Albine in Massenet’s Thaïs with Florida Grand Opera, Zita in Puccini’s Gianni Schichiwith Aspen Music Festival, Owl in Unsuk Chin’s Alice in Wonderland with Opera Theatre of Saint Louis, and Lily in Gershwin’s Porgy and Bess at Grand Théâtre de Genève.

Ms. Bryce-Davis is a 2018 recipient of the prestigious George London Award, the 2017 1st Place and Audience Prize-winner of the Concorso Lirico Internazionale di Portofino competition, chaired by Dominique Meyer, Winner of the 2016 Richard F. Gold Career Grant, Winner of the 2015 9th International Hilde Zadek Competition at the Musikverein in Vienna, the 2015 Metropolitan Opera National Council Pittsburgh District, and the 2015 Sedat Gürel - Güzin Gürel International Voice Competition in Istanbul. She holds a Master of Music and Professional Studies certificate from the Manhattan School of Music and a Bachelor of Music from the University of Texas at Arlington.
http://www.raehann.com