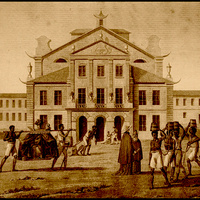 April 8, 2020
Wednesday, 12:00-12:50 P.M.
• Zoom
Please register in advance for this meeting:
https://ucr.zoom.us/meeting/register/u5Isce6srTMjHTi6M4fWNx2FhrMUarAzzQ
After registering, you will receive a confirmation email containing information about how to join the meeting.

Historians and anthropologists (Chalhoub, Hespanha, DaMatta) have searched for the origins and veiled nature of Brazilian racism in the notions of privilege and “quality” that determined the stratified organization of the Portuguese colonial empire. Politics and government have long changed, but social hierarchies based on perceptions of race and class distinction and containment not only persist, but sometimes are the rationale for political change, as seen in the latest elections. This paper examines two examples of social stratification that overlap with and reinforce practices of racial containment during the eighteenth and early nineteenth centuries. Firstly, it addresses a written narrative of a 1790 civic festival in Cuiabá, Mato Grosso, in which the descriptions of dance and “opera” performances hail individuals as subjects of a multi-racial Empire, although contained within categories, while revealing racial preconceptions that are surprisingly present in 21st century Brazilian media. Secondly, it examines the trajectory of an opera company in Rio de Janeiro, from the 1780s to the 1810s, when it was joined by a number of recently-arrived Italian and Spanish singers and dancers, resulting in the transformation of models of professional organization but not of racial containment.

Rogerio Budasz researches a number of scenes and institutions in pre-industrial Brazil to understand how music, musicians, and ideas about music have both reflected and shaped Brazilian culture and society. His recent works focus on early opera, jesuits, guitars, and slavery.