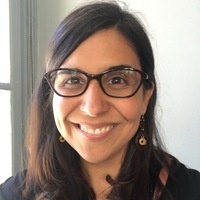 Please turn off your cell phones and other electronic devices.  No flash photography, audio or video recording.

As a genre, the road movie focuses on the transformative experiences of the protagonist(s) as they undertake a journey where music plays a significant role. Alonso Ruizpalacio’s road film Güeros (2014)adheres to the road movie conventions but uses both music and silence in innovative ways. Set against the 1999 protests at the National Autonomous University of Mexico, Güeros follows the protagonist Sombra, his little brother, and two university students as they travel through Mexico City over a 24-hour period in search of a famous rock singer from their childhood. Compellingly, we are not allowed to hear the music of their idol; pregnant pauses frame their nostalgic journey. Instead, the soundtrack consists of canciones and boleros from Mexican national cinema’s época de oro by the famous bolerista Agustín Lara. The substitution of the rock legend’s music for music of the past enforces both a reflective and restorative nostalgic interpretation of self-discovery that crosses through intersections of modernity and tradition in Mexico City. This presentation navigates through this eclectic soundscape and its ties to contemporary Mexican national identity. While displaying characteristics of the road movie genre, Güeros supplies a new musical paradigm for understanding aural constructions of both the soundscape of Mexico City and the changing identity politics taking place on and off the silver screen.

Jacqueline Avila is an Associate Professor in Musicology at the University of Tennessee. Her research focuses on film music and sound practice from the silent period to present, and the intersections of identity, tradition, and modernity in the Hollywood and Mexican film industries. Dr. Avila was the recipient of the UC MEXUS Dissertation Research Grant, the American Musicological Society’s Howard Mayer Brown Fellowship, the UC MEXUS Postdoctoral Fellowship (2014-2015), and the Robert E. Greenleaf Visiting Library Scholar Award (2016).  Her publications can be found in the Journal of Film Music, Latin American Music Review, Opera Quarterly, American Music, the Oxford Research Encyclopedia of Latin American History, and the newly published edited volume Cinema Between Latin American and Los Angeles: Origins to 1960. Her book Cinesonidos: Film Music and Identity in Mexico’s época de oro is published with Oxford University Press, Music/Media Series.