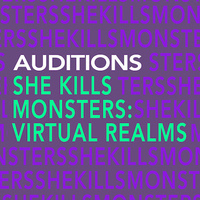 OPEN TO ALL UCR STUDENTS, REGARDLESS OF MAJOR, GEOGRAPHIC LOCATION, TECHNICAL EQUIPMENT, AND/OR SPATIAL CONSTRAINTS FOR STREAMING.

She Kills Monsters: Virtual Realms tells the story of Agnes Evans as she leaves her childhood home in Ohio following the death of her teenage sister, Tilly. When Agnes finds Tilly’s Dungeons & Dragons notebook, however, she stumbles into a journey of discovery and action-packed adventure in the imaginary world that was Tilly’s refuge. In this high-octane dramatic comedy laden with homicidal fairies, nasty ogres, and 90s pop culture, acclaimed young playwright Qui Nguyen offers a heart-pounding homage to the geek and warrior within us all.”

All roles are open to all actors. We are looking to audition Arab, Asian, Black, Latino/a/x, Multi­-Racial, Native, Pacific Islander, and White, Female­-Identifying, Male­-Identifying, Gender Non-Binary, Trans, abled and/or disabled performers for all roles.

Actors should prepare:
• A one-minute monologue that will give a sense of your vocal and physical ability.
• A one-minute story of something that happened to you or about you.
The director hopes to learn something about your vocal and physical instruments. How do you usually move and speak? How might you move and speak as a character? Give some sense of how you can project in the virtual environment.

Tips for the audition:
• Read the play before auditioning. A 24-hour online perusal copy of the script may be requested here.
• Select an audition space with your back to a wall so that others will not pass behind you.
• Use good lighting preferably in front of your face.
• For at least one selection – provide a sense of movement (using a prop, shifting in the space, etc.).

How to audition:
• You must sign-up in advance for a time slot here. You will receive the Zoom link to the audition room on the day of auditions.
• Download and fill out the PDF Audition Form here.
• Once this form has been completely filled out and you have signed up for a time slot, email your Audition Form and a headshot photo to Jenna Hsueh, Stage Manager: jhsue001@ucr.edu.

Please note:
• All rehearsals and class sessions will take place remotely in Zoom.
• Please review the production calendar here before signing up to audition.
• For the audition you may wear anything you want to wear.
• Cast members will be enrolled in four units of TFDP 170.

Meet the Director:
Barrie Gelles, the director, will be holding a “meet the director” session on Tuesday, December 8th at 6:30pm. This is not required, but you are welcome to come say hello and ask questions about the show. If you want to attend the meet-and-greet please email Jenna Hsueh, Stage Manager (jhsue001@ucr.edu), for the Zoom link.

Character Descriptions (written by Barrie Gelles):
AGNES - a high school senior, character is female
Agnes’s sister died one year ago, and she is still processing that loss. She is popular, a cheerleader, and has an ideal boyfriend - but she can’t quite find the happiness that seems to be within her reach. She is smart and confident, but also a little lost. Agnes wonders if she will ever get over having lost her sister but does not yet realize that what she really needs is to find herself. When she falls into the world of Dungeons and Dragons, she realizes that the greatest quest is the quest for one’s own identity.

TILLY - the ghost and avatar of a high school sophomore, character is female and/or non-binary
Tilly appears to her sister, Agnes, in the form of memory or in the form of her avatar (Paladin Tillius, who happens to be male). Tilly is a “girl-nerd,” and a Dungeon Master (meaning that she created the stories for the D&D game that she and her friends played). She is fascinated by fantasy and magic and spends most of her time with people who share those interests. She is creative, bold, and unconventional. She imagines herself to be a paladin and therefore will always fight for what is right, just, and good, protecting everyone she loves from the darkness. Tilly creates worlds for those who do not fit in elsewhere.

CHUCK - a high school freshman, character is male
Chuck is a Dungeon Master - maybe the best DM in town. He runs multiple games a week, has the best stories, and files of backgrounds, music, and special effects to make it extra awesome. In the nerd world, Chuck is really cool. He has a lot of swagger and is pretty pleased with the niche talent he has cultivated. But, in the real world, Chuck does not have the same social status as he does in the world of D&D. Chuck is very aware that status works differently in real life - and that is why he considers himself to be an ambassador and guide to anyone who wants to venture into the fantasy world of D&D.

VERA - a high school senior, character is female
Vera knows exactly who she is and doesn’t care if it makes sense to you or not. You have never met anyone who can make cheerleading seem punk-rock the way Vera can. She is immune to peer pressure, speaks her mind, and is an amazing friend. In fact, she is Agnes’s best friend. Vera will stand by you through it all. And don’t even think about crossing her.

MILES - a high school senior, character is male
Miles is a really good guy - a mensch even. He has been dating Agnes for a long time and genuinely loves her. But he is only a teenager and it is hard to know how to navigate a relationship when the person you love is living through loss. He worries that they aren’t connecting anymore but gives her the space and time she needs. There isn’t anything Miles wouldn’t do for Vera - all she has to do is ask.

KALIOPE / KELLY - a high school student, character is female
Kaliope exists in the world of Dungeons and Dragons (she is Kelly’s avatar, known as a “character” in D&D parlance). She is a dark elf with plenty of magic up her sleeves. She has an agile mind and spirit and more than her fair share of magic. She likes to get into good trouble. And, yes, her ears are pointy.
Kelly exists in the real world. She loves D&D and has created one of the most sensational characters around. Even the best gamers struggle to keep up with her. Kelly has cerebral palsy and it impacts her physicality. She is Ronnie’s sibling.

LILITH / LILLY - a high school student, character is female
Lilith exists in the world of Dungeons and Dragons (she is Lilly’s avatar, known as a “character” in D&D parlance). She is a “demon queen,” complete with horns and the bravado of being the alpha in the room. She is a fierce warrior and is almost impossible to defeat in battle. Lilith is fearless.
Lilly exists in the real world. She is a little timid and keeps a low profile. Lilly loved Tilly very much and misses her every day - they had a band together, they played D&D together, they were inseparable. Lilly isn’t ready to talk about her sexuality but she says that Tilly saved her.

ORCUS/ RONNIE - a freshman high school student, character is male
Orcus exists in the world of Dungeons and Dragons (he is Ronnie’s avatar, known as a “character” in D&D parlance). He is a demon and is “scary AF.” Orcus is the former Overlord of the Underworld but he has retired because he got bored of being constantly attacked by adventurers who couldn’t possibly beat him. He is craving a new adventure.
Ronnie exists in the real world. He loves video games, rewatches Battlestar, reads comics, knows every single character in the Star Wars universe, and would have probably been one of the nerds who campaigned to get the Firefly movie made when they ended the series too soon . He has a tendency to say exactly what he is thinking without much of a filter - this can make things awkward but you always know where you stand with Ronnie. He is Kelly’s sibling.

THE GREAT MAGE STEVE - a high school student, character is male
The Great Mage Steve exists in the world of Dungeons and Dragons. He is an avatar for Steve, who exists in the real world and has not yet thought up a good name for his character. Steve does not really know how to play D&D but he really wants in with the cool nerd crowd. He tries to join adventures but his character just keeps dying.

FARRAH THE FAERIE - a high school student, character is female
Farrah exists in the world of Dungeons and Dragons. She is a faerie who has an ethereal presence, a mellifluous voice, but a really cranky attitude. She is one of the great guardians and is so tired of people expecting her to be sweet and gentle. Farrah will have no qualms about killing your character if you annoy her.

EVIL TINA and EVIL GABBI - high school seniors, characters are female
Evil Tina and Evil Gabbi are two different characters but, like Rosencrantz and Guidenstern, no one is sure who is who. They are cheerleaders and hold the kind of unearned power that popular kids in high school wield. They are referred to as Evil Tina and Evil Gabbi because they take the mean-girl routine even farther - they are out and out bullies. Though they exist in the real world, the D&D nerds imagine them as ferocious demons that they must vanquish in their virtual realm.

NARRATOR - character can be any gender
The trusty narrator guides the audience through the story and takes them along on our adventure. The narrator will also have several tasks to complete in scenes where they do not have lines.

POTENTIAL ENSEMBLE
We may decide to cast additional actors to create an ensemble of characters who would be part of these worlds (the real world and the fantasy one). These characters would have no lines, but would still have a lot of creative work to do as artists.