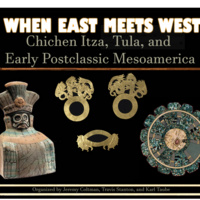 The site of Chichen Itza in Yucatan, Mexico, is one of the most well known yet least understood sites in all of Mesoamerica. Despite being an UNESCO World Heritage site and named one of the new Seven Wonders of the World in 2007, there is much disagreement among scholars regarding chronology, cultural exchange, ethnicity and identity, burial practices, and hieroglyphic texts. This is why it is more timely than ever to have a conference that addresses these topics. Much of the cutting edge research being done on Chichen Itza is happening with collaborations between faculty and graduate students at University of California, Riverside. Bringing together a diverse group of researchers from the United States and Mexico to tackle these complex issues will undoubtedly shift the paradigm and lead to fresh insights and interpretations. Furthermore, it will showcase the important work being done at this university by both students and faculty

With many thanks to the CHASS Dean’s Office, the Selz Foundation, and UCR Center for Ideas and Society