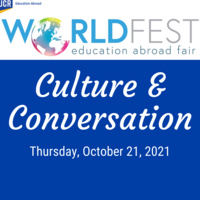 Worldfest Culture & Conversation event is to promote cultural and foreign language programs in partnership with the Comparative Literature & Foreign Language department. Meet us at the Belltower to learn more about programs abroad, as well as explore cultural student organizations at UCR.

Sponsored by the Highlander Abroad Fund