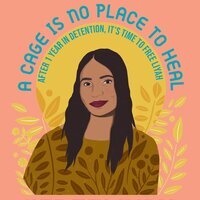 Write a letter to Liyah ...

Liyah Birru, a Black immigrant from Ethiopia, was prosecuted and incarcerated for defending herself against her abusive husband who had subjected her to beatings, sexual assault, verbal abuse, threats, and racial slurs. After serving her sentence, she now faces the added punishment of deportation. Liyah’s story is all too familiar. Black women, particularly immigrants, are incarcerated and deported at over twice the rate of white women. Upwards of 90% of incarcerated women are survivors of domestic violence or sexual assault.