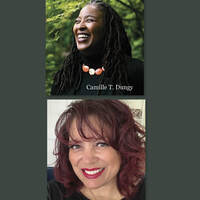 Camille T. Dungy’s debut collection of personal essays is Guidebook to Relative Strangers (W. W. Norton, 2017), a finalist for the National Book Critics Circle Award. She is also the author of four collections of poetry, most recently Trophic Cascade (Wesleyan UP, 2017), winner of the Colorado Book Award. She was awarded a Guggenheim Fellowship in 2019.

Dungy’s other poetry collections are Smith Blue (Southern Illinois UP, 2011), finalist for the William Carlos Williams Award, Suck on the Marrow (Red Hen Press, 2010), winner of the American Book Award, and What to Eat, What to Drink, What to Leave for Poison (Red Hen Press, 2006), finalist for PEN the Center USA Literary Award for Poetry. Dungy edited Black Nature: Four Centuries of African American Nature Poetry (UGA, 2009), co-edited the From the Fishouse poetry anthology (Persea, 2009), and served as assistant editor on Gathering Ground: Celebrating Cave Canem’s First Decade (University of Michigan Press, 2006). Her poems and essays have appeared in Best American Poetry, Best American Travel Writing, 100 Best African American Poems, nearly 30 other anthologies, plus dozens of print and online venues including Poetry, American Poetry Review, VQR, Guernica, and Poets.org. Other honors include two Northern California Book Awards, a California Book Award silver medal, two NAACP Image Award nominations, two Hurston/Wright Legacy Award nominations, fellowships from the Sustainable Arts Foundation, and fellowships from the NEA in both poetry and prose. Dungy is currently a Professor in the English Department at Colorado State University. She lives in Fort Collins, Colorado with her husband and child.
https://www.gf.org/fellows/all-fellows/camille-t-dungy/
_______________________________

Kimberly Guerrero, Artistic Director
Assistant Professor of Theatre, Film, and Digital Production
Kimberly Guerrero is an Oklahoma-born, LA-based actor, writer, producer and director. A member of Steppenwolf’s original cast of the Pulitzer Prize and Tony Award-winning play, August: Osage County, Kimberly appeared in Chicago, on Broadway, at the National Theatre (London), and The Sydney Theatre Company (Australia) and went on to join director Sam Gold’s cast at The Old Globe in San Diego. Other notable stage credits include Manahatta (The Public Theater, NYC), The Frybread Queen (Native Voices, LA) and Steel Magnolias (TPAC, Nashville). A few of her notable film/television acting credits include The Glorias, The Dark Divide, Catch the Fair One, A Wrinkle in Time, Blood and Oil, Longmire, Bones, Grey’s Anatomy, Hidalgo, Charmed and a memorable turn as Jerry’s Native American girlfriend in Seinfeld. Kimberly has received several awards for acting including Best Actress in a Feature Film (Red Nation Film Festival) for her portrayal of Wilma Mankiller in the biopic The Cherokee Word for Water. As a screenwriter, she has been a fellow of the Sundance Screenwriters Lab and a finalist for the Disney/ABC Writers Program, Rockefeller New Media Fellowship, and Humanitas Award in Screenwriting. A co-founder of the award-winning StyleHorse Collective, she has co-written, produced and directed short films, music videos, PSAs and plays including We (Best Music Video, AIFF 2018), Powwow Sweat (a CDC funded PSA/fitness campaign) and Creation Station (Showcase Theatre, San Diego). Having completed her undergraduate studies at UCLA then spending years in the entertainment industry witnessing a woeful lack of authentic, compelling roles written for Native Americans, she garnered an MFA in Creative Writing from the University of California, Riverside, and is currently shopping projects that feature contemporary Indigenous characters and storylines.
https://news.ucr.edu/articles/2019/04/16/kimberly-guerrero-co-starring-cbs-drama-pilot
https://www.imdb.com/name/nm0635846/?ref_=fn_al_nm_1

Kalani Queypo
Kalani Queypo is an actor, musician, director, writer and producer. He was born and raised in Hawaii and is best known for his acting roles in The New World, Jamestown and Trickster. He has received the RIIFF's Directorial Discovery Award for his short film "Ancestor Eyes", and is a founding member of SAG-AFTRA's National Native American Committee and serves on the Advisory Council for Native Voices Theater at the Autry. His latest writing projects in development include a stage play, Stored and Safe, and his television series, When You Miss Aloha.
- IMDb Mini Biography By: Red Haircrow
https://www.imdb.com/name/nm0703398/bio?ref_=nm_ov_bio_sm
https://www.kalaniqueypo.com/bio-1

Carolyn Dunn
Carolyn Dunn is a poet, playwright and scholar whose poetry, short fiction, and nonfiction have appeared in numerous journals and anthologies. Her poetry has been collected in Outfoxing Coyote and the forthcoming Echolocation; she is the editor of two anthologies: Hohzo — Walking in Beauty (with Paula Gunn Allen) and Through the Eye of the Deer (with Carol Comfort); and she is the author of a children’s book, Coyote Speaks (with Ari Berk). Her play The Frybread Queen will be produced by Native Voices at the Autry as part of Native Voices’ 2010-2011 season, and will be published along with her plays Ghost Dance and Yellow Bird by Alexander Street Press in the anthology North American Indian Drama (2010). Dunn is also a songwriter and member of the all–women Native drum group The Mankillers, whose fourth cd will be out in sometime this millenia. Carolyn is a new Assistant Professor at Cal State LA. www.carolyndunn.com.

Kyrié Eleison Owen
Kyrié Eleison, Editor-in-Chief Santa Ana Review, is an experimental writer and nonfiction MFA candidate at University of California Riverside. She holds a B.A. in Creative Writing from University of Cincinnati and was the nonfiction editor for the literary journal Short Vine. She has been published in Flights and On Loan From the Cosmos. She is an enrolled member of the Comanche Nation.