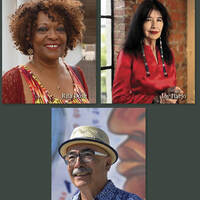 This award night is the closing event of the UCR-hosted festival.
A ticketed after-event award celebration is scheduled with LA Review of Books. Learn more

Joy Harjo
Joy Harjo’s nine books of poetry include An American Sunrise, Conflict Resolution for Holy Beings, How We Became Human: New and Selected Poems, and She Had Some Horses. Harjo’s memoir Crazy Brave won several awards, including the PEN USA Literary Award for Creative Non-Fiction and the American Book Award. She co-edited two anthologies of contemporary Native women’s writing: When the Light of the World was Subdued, Our Songs Came Through and Reinventing the Enemy’s Language: Native Women’s Writing of North America, one of the London Observer’s Best Books of 1997. She is the recipient of the Ruth Lilly Prize from the Poetry Foundation for Lifetime Achievement, the 2015 Wallace Stevens Award from the Academy of American Poets for proven mastery in the art of poetry, a Guggenheim Fellowship, the William Carlos Williams Award from the Poetry Society of America, and the United States Artist Fellowship. In 2014 she was inducted into the Oklahoma Writers Hall of Fame. A renowned musician, Harjo performs with her saxophone nationally and internationally, solo and with her band, the Arrow Dynamics. She has five award-winning CDs of music including the award-winning album Red Dreams, A Trail Beyond Tears and Winding Through the Milky Way, which won a Native American Music Award for Best Female Artist of the Year in 2009. Harjo’s latest is a book of poetry from Norton, An American Sunrise. In 2019, Joy Harjo was appointed the 23rd United States Poet Laureate, the first Native American to hold the position. She lives in Tulsa, Oklahoma.

Juan Felipe Herrera
Juan Felipe Herrera is the 21st Poet Laureate of the United States (2015-2016) and is the first Latino to hold the position. From 2012-2014, Herrera served as California State Poet Laureate. Herrera’s many collections of poetry include Every Day We Get More Illegal; Notes on the Assemblage; Senegal Taxi; Half of the World in Light: New and Selected Poems, a recipient of the PEN/Beyond Margins Award and the National Book Critics Circle Award; and 187 Reasons Mexicanos Can’t Cross The Border: Undocuments 1971-2007. He is also the author of Crashboomlove: A Novel in Verse, which received the Americas Award. His books of prose for children include: SkateFate, Calling The Doves, which won the Ezra Jack Keats Award; Upside Down Boy, which was adapted into a musical for young audiences in New York City; and Cinnamon Girl: Letters Found Inside a Cereal Box. His book Jabberwalking, a children’s book focused on turning your wonder at the world around you into weird, wild, incandescent poetry, came out in 2018. Herrera is also a performance artist and activist on behalf of migrant and indigenous communities and at-risk youth.