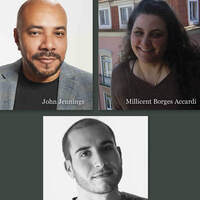 John Jennings
John Jennings is a Professor of Media and Cultural Studies at the University of California at Riverside. Jennings is co-editor of the Eisner Award-winning collection The Blacker the Ink: Constructions of the Black Identity in Comics and Sequential Art. Jennings is also a 2016 Nasir Jones Hip Hop Studies Fellow with the Hutchins Center at Harvard University. Jennings’ current projects include the horror anthology Box of Bones, the coffee table book Black Comix Returns (with Damian Duffy), and the Eisner-winning, Bram Stoker Award-winning, New York Times best-selling graphic novel adaptation of Octavia Butler’s classic dark fantasy novel Kindred. Duffy and Jennings recently released their graphic novelization of Octavia Bulter’s prescient dystopian novel Parable of the Sower (Abrams ComicArts). Jennings is also founder and curator of the ABRAMS Megascope line of graphic novels.

Millicent Borges Accardi
Millicent Borges Accardi, a Portuguese-American poet, is the author of three books: Injuring Eternity, Only More So (Salmon Poetry Ireland 2016) and Woman on a Shaky Bridge. Her awards include the NEA, Fulbright, CantoMundo, California Arts Council, FLAD, Money for Women (Barbara Deming). Millicent holds degrees in English and writing from CSULB and the University of Southern California.

Joseph Cassara
Joseph Cassara is the author of The House of Impossible Beauties, which won the Edmund White Award for Debut Fiction and was a finalist for the Lambda Literary Award for Gay Fiction. He is the George & Judy Marcus Chair in Creative Writing and Assistant Professor at San Francisco State University.