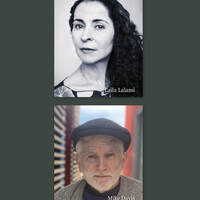 Laila Lalami
Laila Lalami was born in Rabat and educated in Morocco, Great Britain, and the United States. She is the author of four novels, including The Moor’s Account, which won the American Book Award, the Arab-American Book Award, the Hurston/Wright Legacy Award and was a finalist for the Pulitzer Prize in Fiction. Her most recent novel, The Other Americans, was a national bestseller and a finalist for the Kirkus Prize and the National Book Award in Fiction. Her essays and criticism have appeared in the Los Angeles Times, the Washington Post, The Nation, Harper’s, the Guardian, and The New York Times. She has received fellowships from the British Council, the Fulbright Program, and the Guggenheim Foundation and is currently a full professor of creative writing at the University of California at Riverside. She lives in Los Angeles. Her new book, a work of nonfiction called Conditional Citizens, was published by Pantheon in September 2020. You can order it here.

Mike Davis – D. Charles Whitney Reader
Mike Davis, recently awarded the 2020 Lannan Cultural Freedom Prize for his life’s work as a public intellectual who encourages critical analysis of society in the service of constructing an alternative, post-capitalist future in both theory and practice, named a MacArthur Fellow in 1998, Davis was also honored for distinguished achievement in nonfiction writing this past fall by the Lannan Literary Foundation. Professor Davis is the author of more than 20 books and more than 100 book chapters and essays in the scholarly and elite popular press. His scholarly interest span urban studies, the built environment, economic history and social movements. Perhaps his best known book, City of Quartz: Excavating the Future in Los Angeles was named a best book in urban politics by the American Political Science Association and won the Isaac Deutscher Award from the London School of Economics and has been translated into eight languages